German industry eagerly watched the presentation of the European Commission’s new energy and climate package on Wednesday July 14, expressing concerns over a reform of the EU carbon market that could result in the removal free CO2 pollution permits by 2036.

The Commission proposal marks the start of a long struggle to get the legislation approved, as EU states fight for their national interests in negotiations with the European Parliament, a process that typically takes two years.

And the German government is known to have the interests of its industry at heart. The main demand of the industry is to maintain the industrial competitiveness of the country in the face of rising carbon prices and to avoid international trade frictions caused by the new external carbon tariff proposed by the EU.

The global push for decarbonization is both a great challenge and an opportunity for German industry, said Peter Altmaier, German Minister of Economy.

“This is the most important legislative proposal since Jacques Delors’ single market package of proposals,” said Altmaier, who spoke to journalists on July 15.

“Green technology made in Germany has a great reputation around the world,” he added.

Still, German industry is worried about the impact the new rules will have on business.

“It is not enough to be a model for the world,” added Wolfgang Große Entrup, managing director of VCI, the German chemical industry association, who insisted that the country’s industrial competitiveness must be preserved.

Discontent with the carbon tax at the border

At the heart of German industry concerns is the European Commission’s proposal to introduce a tariff at the external borders, aimed at ensuring that importers of foreign products are charged the same carbon price as European manufacturers.

The border carbon tax, the first of its kind in the world, would apply to six sectors: electricity, steel, aluminum, fertilizers and cement.

“An EU lab experiment with border taxes is dangerous and already doomed,” Entrup warned, adding that the proposal would not protect exports by European companies to international markets.

Altmaier defended the Commission proposal, which provides for a pilot phase for certain product categories such as steel, aluminum and cement. Green steel is likely to be 30-40% more expensive than regular steel, making it uncompetitive without an instrument like the proposed carbon border adjustment measure (CBAM), said the German minister of the Economy.

But industry representatives are skeptical and have expressed their preference for the current system in which industries receive free CO2 pollution credits under the EU’s carbon market, the Emissions Trading System. ’emission (ETS).

“The border adjustment has not yet been tested and carries considerable risks,” warned Hans Jürgen Kerkhoff, president of the German steel industry association, who lamented that the free CO2 credits for the industry are “massively melted” after 2030.

“The proposed CO2 border adjustment only protects businesses within the EU and is associated with considerable legal and bureaucratic obstacles,” said Peter Adrian, President of DIHK, the social partner of German industry.

Adrian joined the chorus of German industrialists calling for the application of the carbon tax at borders in addition to the free allocation of CO2 pollution permits.

According to the Commission proposal, the free allowances will be phased out as the CBAM begins to apply. They will then be fully terminated by the “firm date of 2035,” EU climate chief Frans Timmermans told a press conference on July 14, adding that this would give industry a period of 10 years to adapt.

German industry is not alone in expressing concerns about CBAM. China also expressed “grave concern” about the plan, saying it would be “discriminatory” and contrary to UN principles asserting the historic responsibility of rich nations in global warming.

Pascal Lamy, former head of the WTO, said the free allocation system combined with the new EU carbon tariff risked breaking international trade rules, and warned that it could “eventually lead to a trade war “that would undermine the EU’s climate leadership. 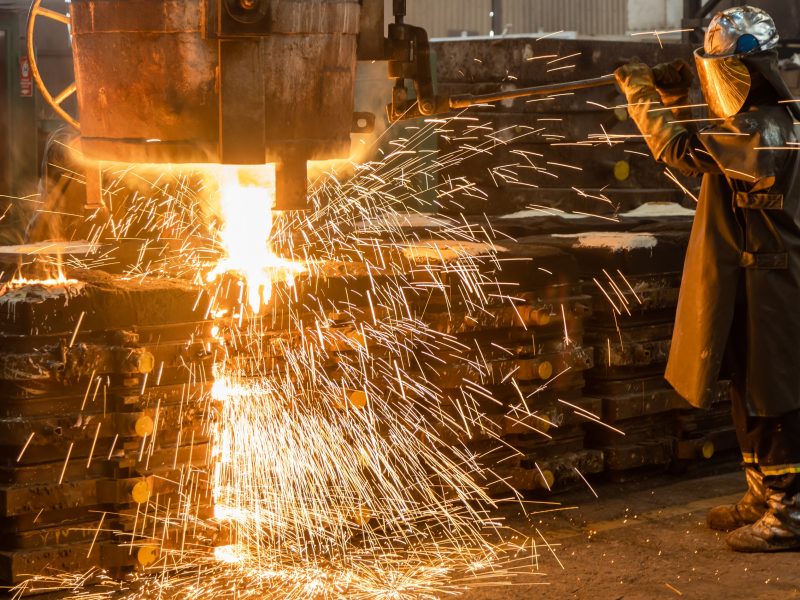 EU climate goals are compromised by ETS grants. They must finish

Some industrial groups have called for maintaining free CO2 quotas in addition to the next carbon tax at the border. Their dependence on subsidies must be ended, otherwise Europe risks triggering a trade war that would also undermine the EU’s climate leadership, write Connie Hedegaard and Pascal Lamy.

Ban on internal combustion engines by 2035

Another source of concern for German industry is the de facto ban on the manufacture of new petrol and diesel cars, which the European Commission wants to introduce as early as 2035.

But banning the internal combustion engine is the wrong answer to decarbonizing road transport, warned Russwurm, who said other technologies like hydrogen and low-carbon fuels are also worth considering. .

“This is hostile to innovation and the opposite of openness to technology,” said Hildegard Müller, president of the association of German car manufacturers VDA.

Parts suppliers in particular will find it difficult to transform at the speed prescribed by the Commission, leading to significant job losses, she warned.

The automotive industry is influential in Germany, where it employs 830,000 people, according to the Federal Bureau of Statistics (Destatis).

However, the German government’s negotiating position could be relaxed by national auto giants who have already announced that they will stop producing internal combustion engines.

Volkswagen has announced that it will stop producing diesel and gasoline cars by 2035, just days before the Commission unveils its package, while Audi plans to stop production of combustion engines as early as 2033.

Sales of new cars and vans that produce carbon emissions will be banned from 2035, proposals tabled by the European Commission revealed on Wednesday (July 14th), a move that almost guarantees that the era of the internal combustion engine (ICE ) is emerging. at its end in the EU.